Following up a Saturday morning spent at the Eagle’s nest, Steve and I traveled to Victoria Glades to finish up the day during the perfect season to spend time on Missouri Ozark Glades.  We decided to focus on the MDC side of things as we explored The Nature Conservancy holding about the same time the previous year.  My primary goal of the day was to get some acceptable shots of a Prairie Warbler while performing his song.  I had no idea how relatively easy this would be.  We were able to find this male almost immediately along the trail as he patrolled his territory – focusing on trees isolated within the glade habitat.

Lovers of the treetops and focused more on trees that make up the forest edge border with the glade, the Yellow-breasted Chat is a bird I have wanted to get photos of for quite some time.  Not perfect, but acceptable.  Steve and I watched and listened as neighboring males carefully partitioned the area into well established boundaries that they seemed to know so well.

What’s that?  Getting bored with yellow?  Okay, let’s change things up a little and look at this Scarlet Tanager male that we found within the forest canopy.  With a song similar to the Summer Tanager, the chip-burr call note of the Scarlet Tanager is most diagnostic.  We were somewhat surprised to find a couple of Summer Tanagers singing in the open areas of the glade near sunset later this evening.

And now for something downright plain.  Well, at least from the front, which is not the Field Sparrow’s best side.  This female was definitely not interested in us as we got these close looks of her trying to feed on insects and seed at the same time.  We watched her and listened to her mate advertise his rights to their home with his dropping ping-pong ball like song.

Just when you thought we were done with the yellow…  Along with the Chat, these were my first photographs of a Blue-Winged Warbler as well.  After we discovered what the hell was going on, Steve and I discovered and learned the dawn song of this feisty bird.

On our travels through the glades we couldn’t help but take note of this truly magnificent Post Oak, surrounded by blooming prairie/glade forbs such as Fremont’s Leather Flower and Lance-leaved Coreopsis.  Mostly secluded on a low hill, this was the spot to wait and see if the sunset would turn into anything special.  As we watched the progression of dusk we were most fortunate in hearing a special symphony composed of Woodcock, Whippoorwill, Chuck-Will’s Widow and Barred Owl.  Twas quite the memorable day and it goes without saying, I can’t wait to get back. 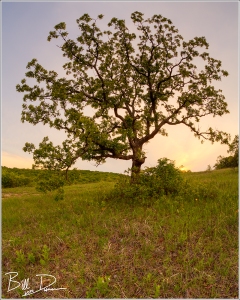 2 thoughts on “A Spring Day at Victoria Glades”