Ansel Adams and some of his cohorts fought an epic battle in the first half of the 20th century against pictorialism – the manipulation of pure, sharp photographs with other artistic objectives.  Pictorialists often produced images that were deliberately lacking in sharpness, low DoF, were hand-painted or toned with various pigments, all in order to place more of an artistic interpretation to the relatively cold and literal technological tools that photography introduced.  Although most of the greats of this period, Adams and Steichen, Weston and Cunningham, began as Pictorialists, by the end of their respective careers these folks had shunned this practice and those that persisted to its employ.  The literal interpretive of negative to positive in the photographic process was considered to be the only truly valid option of the photographic artist.  Certain protocol were acceptable – using darkroom tools to manipulate emphasis in tones of the final print, for example.  But, other than focusing on composition and obtaining as much DoF and overall sharpness as possible, the photographer became shackled in the tools that were “acceptable” to being taken seriously as an artist.

This is pretty much true today.  Sure photography has been and to this day is still used in other types of art – using photos in mixed-media, pop culture works for instance.  But the modernist view of photography is still the dominant and expected form.  Any manipulation in making the exposure “in the camera” is acceptable, but other than the digital manipulation that is analogous to the darkroom of old, you are not allowed to interfere with risk of being completely shunned.  For as long as I have been involved in serious photography I have wholeheartedly agreed with this.  We have all seen the effects of plug-in filters in “Photoshop” and how tacky and cliched they become.  I have looked through images like these on Flickr and thought those thoughts exactly.  Until recently.  The latest Photoshop, “CS6” has a new and improved “oil paint” filter.  I have experimented with it a bit lately and I must say, it is growing on me.  I think it does a great job of mimicking a real oil-painting.

The “photographer” is given six sliders to manipulate their painting/photo: four for the “brush”: stylization, cleanliness, scale and bristle detail, and two for “lighting”: angular direction and shine.  With these sliders the artist can manipulate the “canvas” almost as much as one of those snobby old people with an easel who insist in sitting right where you’d prefer to set up your tripod.  Just kidding!  The majority of painters I’ve come across have been quite friendly and eager to talk nature with me.  My point is that you have a lot of options in how the final output can look like. 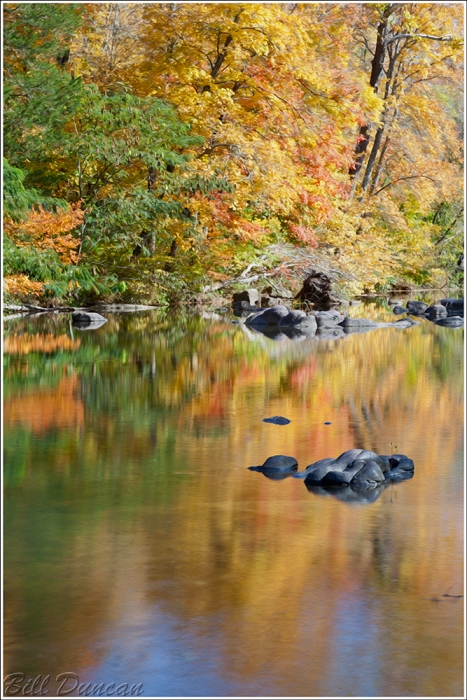 What I feel I like best about doing this to a photograph can be observed in the two images above.  In both of these un-manipulated photos the bush was nearly too chaotic, although each had pleasing colors, shapes and form.  It made the composition messy.  Putting some brush strokes on top of this took a bite out of all that detail and presented, may I say – order? from the brush of the “composer”.

One of the most characteristic plants of the St. Francois Mountain region of the Missouri Ozarks, these trees are easily identified by their unique bark.  If I were patient enough to paint, I know that bark would be my favorite thing to represent in this composition.  The oil paint filter adds a bit of texture to the empty, white negative space.  I feel this images is improved by this treatment as well.

I love that this technique can be used to emphasize texture and pattern, something that could be difficult to do in a traditional modern photograph.  I can easily see an image like one of these printed on canvas.  Would you be able to tell the difference?  I’m not saying that all photos should be presented like this.  It would be easy to overdo and I can see this one becoming cliche’ like the emboss or watercolor filters that have been in PS for years.  I do think there is something interesting going on.  Painters have been using photography, to greater or lesser degree, to help their art work for decades.  In some of these cases the only difference in output is that the person lays down oils on top of projections.  Here, the computer does the same thing in a shorter time.