Located near Graniteville in Reynolds Co, MO Johnson’s Shut-Ins is one of the largest and pleasingly aesthetic shut-ins found in the state.  This is another spot found in the geologically intriguing St. Francois Mountains of the Missouri Ozarks.  Formed by one of the meandering forks of the Black River, cascades, chutes and potholes have been formed in Taumsauk rhyolite, the ~1.5 billion year old rock that makes up the majority of this spectacular geologic feature.  This rhyolite, which is a cousin to granite, is extremely hard and resistant to wear, so the water acts mostly upon joints or fractures in the rock and carves these areas down smooth to form the Ozark’s recreational fun zone that many people enjoy today.

Unfortunately, this park was irreversibly changed following the December 2005 disaster when a wall of the Ameren UE hydroelectric reservoir failed and a resulting 1.3 billion gallons of water ravaged the Johnson’s Shut-In SP and surrounding area.  This water rushed down the hillsides in less than 12 minutes. 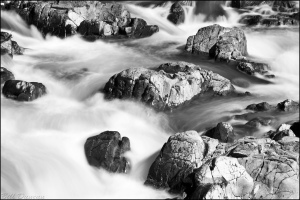 A true example of an anthropogenic induced disaster upon nature, the water scoured everything in its path down the Profit Mountain slopes to clean bedrock.  This resulted in the loss of near pristine habitat that made up several officially designated Natural Areas, but has given geologists an interesting, uninterrupted view of the granites, rhyolites, sandstones and dolomites that are the primary rocks of the St. Francis Mountains. 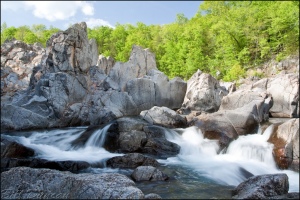 Do a web search to view images immediately following the disaster and you can see it is amazing that the area was able to be cleaned up and facilities rebuilt to the current state that they are about six years later.  There is a boulder field near the current entrance to the State Park.  I was told by a Park official those boulders weigh in the neighborhood of three to 30 tons a piece and that none of them are close to the same place they had been prior to the disaster.

I’ve seen some amazing photographs taken before the reservoir collapse contrasting the shut-ins against maple trees in brilliant autumn foliage.  It seems most of the maples around this spot are gone and there hasn’t been a very good autumn show here in the four or so years I’ve been interested in nature photography.  This is a real shame.  However, when I think about these types of disasters, whether man-made or natural I try and put it into a geological or biological perspective.  In these perspectives this type of disaster is a temporary change or setback.  In the equivalent moment of a breath of the earth this type of activity will be erased from the landscape and nothing but the slightest evidence or mere suggestion of this event shall be evident.

Of course, with the continuing onslaught of the human landscape, these events, multiplied over small number of generations are leading to devastating changes to the biosphere and are adding up to what looks to be one of the six largest extinction events in history.  Considering the primary purpose of this reservoir is to provide extra power to the St. Louis Metropolis, it makes me wonder how long civilization will continue to take and take from the commons without giving serious consideration to the important things.

Do I have to say this is a location I will be visiting for as long as I’m able?